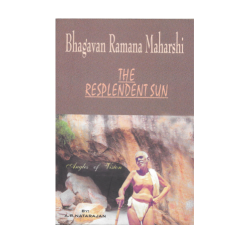 The direct path of Ramana is a journey from the limitations of time and space into the vast vistas of freedom from them. Using the current phrase, known all over the world, one would learn to be always in the ‘Now’; which in turn means that one is always in the moment of experience.

In this journey Ramana is the constant Presence, as the Sadguru guiding, befriending and encouraging. The watchful power of his magnetic eyes, more resplendent than thousand suns, is constantly pouring energy into each one, who has surrendered to him.

Understanding the mind’s true nature makes one aware of the truth that the mind is not self-conscious. Its consciousness is derived from the fullness of it, the heart, from which it has arisen and into which it subsides. This truth can be discovered by Ramana’s path vigilant of self-enquiry.

However, the bondage to time is so deep rooted that without constant prayer and surrender to Ramana, invoking his power, Self-awareness is not possible.

This book has own special stamp. It contains articles on Ramana culled from many seekers and sages through the years. It cuts one a way from the intellect and its reasoning to the realm of intuition, functioning straight from the heart. It is a bouquet of few beautiful flowers, of different hues, from Ramana’s garden, and offered to him with heartfelt gratitude.