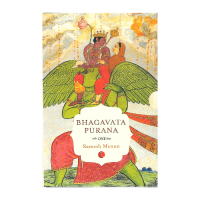 Rupa04
₹1 995.00
In stock
1
Product Details
Even after he has composed the awesome Mahabharata, the Maharishi Vyasa finds no peace. Narada Muni says to him, Ordinary men will be delighted by your work, but what about the Sages of heaven and earth? You have described the human life, its strife, and its ends, but you have not yet described the Lord himself. You must turn your great gift to that task; only then will you find peace. Veda Vyasa composes the Bhagavata Purana, in eighteen thousand slokas and twelve kandas. He teaches it to his illumined son Suka, who narrates the Secret Purana to Yudhishtira s heir, King Parikshit, on the banks of the Ganga. The Bhagavata Purana is a living embodiment of the Lord Narayana and claims to bestow moksha merely by being heard. Just before Krishna, the Avatara leaves the world, Uddhava says to him, leave us a tangible form, Lord, in which we can find you, touch you, and be near you. Krishna enters the Bhagavata Purana with all of his beings. This book is a full literary rendering of the Bhagavata Purana, bringing all the wonder, wisdom, and grace of the Book of God to the modern reader.
Save this product for later
Display prices in: INR