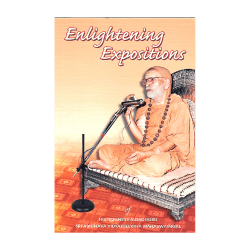 SM030
₹50.00
Out of stock
1
Product Details
This book contains the sacred expositions of Jagadguru Sri Abhinava Vidyatirtha Mahaswamiji and compiled by a disciple.  The Jagadguru had taught the Bhagavad Gita, Brahma Sutras, and the Taittiriya Upanishad, with Shankara Bhagavatpada’s Bhashyams thereon.  Some of the chapters of this book are based on His classes.  On several occasions, the Jagadguru had explained scriptural passages and devotional verses, in private, to the disciple, either completely of His own accord or in response to the disciple’s queries.   These are teachings of Jagadguru also figure in this book. The erstwhile evening newspaper `The Mail’ was publishing the teachings of the Jagadguru, under the column `The Acharya Speaks’, every Sunday, for nearly two years, starting from December 1979.  Each of those articles formed an independent unit.  A few of them have been incorporated in this book with some modifications.  The alterations include the elaboration of certain topics to undo the compression that had been necessitated while penning the articles, to meet the space constraints of the newspaper.  Another change is that connected articles have been merged.  Each chapter of this book is complete in itself like the articles in `The Mail’.  However, the thread of continuity between successive chapters should be evident to the reader.
Save this product for later
Display prices in: INR