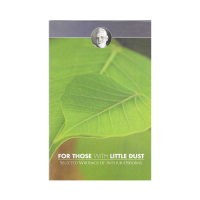 For Those With Little Dust

Arthur Osborne was one of those rare individuals in whom an exceptionally keen intellect and an intensely introspective and poetic spirit were wonderfully integrated. A graduate of Oxford and a lover of learning, he had prepared for what would doubtless have been a brilliant career in teaching. Yet he was compelled to follow his inner longing to experience the Supreme Reality. This ultimately brought him halfway around the world to the abode of the Indian sage, Sri Ramana Maharshi.

Kindled by the flame of spiritual practice, his innate literary abilities were radiantly transformed; he became a vehicle for the larger truths he was experiencing. There are many who have the ability to comment on and interpret spiritual truths, but only when that knowledge is born of experience will the words be empowered, thereby guiding others on the spiritual path.

In the eponymous first editorial of this collection of articles, Arthur Osborne writes, “It is related that after attaining Enlightenment the Buddha’s first impulse was to abide in the effulgence of bliss without turning back to convey the incommunicable to mankind. Then he reflected, ‘Some there are who are clear-sighted and do not need my teachings, and some whose eyes are clouded with dust who will not heed it though given, but between these two there are also some with but little dust in their eyes who can be helped to see; and for the sake of these I will go back among mankind and teach.’”

In the same manner Arthur Osborne dedicated himself to sharing his insight and depth of experience with seekers on the path. From January 1964 to his demise in 1970 he was the editor of The Mountain Path, a journal published at Sri Ramanasramam, the abode of Sri Ramana Maharshi in South India.

The editorials, articles and poems in these pages bridge an expanse of spiritual topics which are uplifting and enlightening. Seekers of Truth from all faiths and paths will find this collection a treasure-house of practical wisdom and guidance.