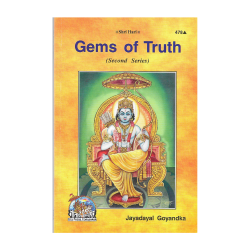 SKU GP478
₹15.00
In stock
1
Product Details
The present volume comprises the second series of articles by syt. Jayadayal Goyandka, published from time to time in the columns of the 'Kalyana-Kalpataru'. As mentioned in first series, the articles were originally written in Hindi for the 'Kalyan' and were subsequently translated into English for the benefit of the English Knowing Public. The warm reception accorded by the public to the first series has encouraged us to publish this second series, Which  will be similarly welcomed. It will prove to be  a handy and valuable manual for those who have an earnest desire to tread the path of God-realization and stand in need of a permanent guide to help them along the path. Language: Sanskrit Shlokas along with English Commentary.
Save this product for later
Display prices in: INR