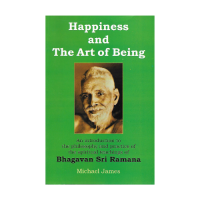 Happiness and the Heart of Being By Michael James

RAM109
₹750.00
Out of stock
1
Product Details
This book, Happiness and the Art of Being: An introduction to the philosophy and practice of the spiritual teachings of Bhagavan Sri Ramana, is an in-depth exploration of both the philosophy and the practice of the spiritual teachings of Bhagavan Sri Ramana Maharshi. Though it is intended primarily to be an introduction to his teachings, it is not a brief one, because in a clear and simple manner it provides a very detailed and deep insight into their core. Therefore though it has been written with the intention that it should be easily understood even by readers who have no previous acquaintance with any form of spiritual philosophy, it should also be useful to readers who already have a good understanding of his teachings. Like the aim of the teachings that Sri Ramana has given us, the aim of this book is to prompt each one of us to think more deeply about the reality of all that we as a seemingly limited individual consciousness experience and know, to help us to understand that the only absolute reality in our entire experience of duality and relativity is our fundamental consciousness of our own essential being, ‘I am’, and thereby to reinforce our love and effort to attend keenly and exclusively to this essential self-consciousness ‘I am’ in order to discover its true nature. The author of this book, Michael James, spent more than eight years studying the original Tamil writings of Sri Ramana and of his foremost disciple, Sri Muruganar, in minute detail under the clear guidance of another close disciple, Sri Sadhu Om, and since the passing away of Sri Sadhu Om in 1985 he has continued to study and practise the spiritual path revealed by Sri Ramana. Therefore the central focus of this book is on the teachings of Sri Ramana as expressed in his own original writings, and hence it contains accurate and carefully worded translations by the author of the whole of Sri Ramana’s prose treatise Nāṉ Yār? (Who am I?) and of most of the verses of his philosophical poems such as Upadēśa Undiyār, Uḷḷadu Nāṟpadu, Ēkātma Pañcakam, Āṉma-Viddai and Upadēśa Taṉippākkaḷ.
Save this product for later
Display prices in: INR