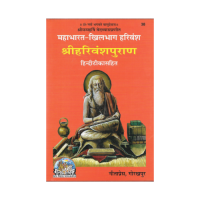 GP 38
₹400.00
In stock
1
Product Details
The Harivansh Puran is an abridged Hindi language version of the famous Sanskrit text, 'Harivamsa Purana' originally credited to have been written by Veda Vyasa. The Puranas are regarded as literary scriptures, all written originally in Sanskrit verse. These texts are classified chronologically as a postscript of an epic and the Harivansh Puran is considered as the corresponding aftermath to the Mahabharata. in many ways, the Harivansh Puran and Mahabharata are complementary to each other. The Harivansh Puran, literally translates to genealogy of Hari (Krishna). The text is divided into three sections. The first section describes the creation of the universe, along with the various incarnations of Vishnu. in the second section, the life of Krishna, the most famous incarnation of Lord Vishnu, is described in detail starting from his birth, his adventures through his childhood and his life during the aftermath of the battle of Kuruksetra. The third and final section includes a detailed account of Kali Yuga. Language: Sanskrit Shlokas with only Hindi Translation.
Save this product for later
Display prices in: INR