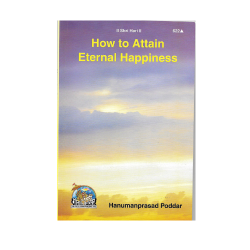 How to Attain Eternal Hapiness

GP622
₹20.00
In stock
1
Product Details
This is a valuable collection of a few articles written by a Nityalilalina Poojya Sri Hanumanprasadji Poddar, the founder editor of the 'Kalyan'. The articles first appeared in the Kalyan and then were rendered into English by a devoted associate of Sri Poddarji, the late Pt. Sri Chimmanlalji Goswami, the editor of the 'Kalyana-Kalpataru', an English magzine published by the Gita Press. Eternal happiness is a misnomer in worldly parlance. In fact the world itself and all that it comprises is ephrmera; and transient. Rather, according to savants like the great Sankaracharya it is not only transient,  but non-existent; its experience is only illusory. God alone is eternal, who is described as Sachchidananda-Swarupa-the embodiment of Sat (existence), Chit (Knowledge) and Ananda (Bliss). Bliss is happiness. In this wise eternal happiness is synonymous with Godhead. The attainment of eternal happiness is tantamount to God-realization.
Save this product for later
Display prices in: INR