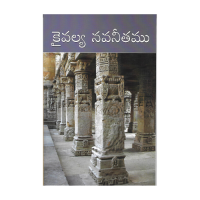 SKU RAMT038
₹90.00
In stock
1
Product Details
Kaivalya Navaneeta is a widely known Advaita classic in Telugu. Navaneeta means butter. Kaivalya or Kevala is the state in which the soul exists, isolated from all connection with the body, etc. From the vast ocean of milk (the Upanishads etc.) the great teachers have drawn the milk of wisdom and filled it in pots (ancient texts). Tandavaraya Swami, the author of the Kaivalya Navaneeta says that he has extracted the butter from the milk. Those who have obtained this (being fed on the butter of divine wisdom — Brahma jnana — and being eternally satisfied) will not roam about feeding on dust (non-real objects of sense). Verses 175 and 179 contain references to Narayana Desikar of Nannilam, as the preceptor of the author of this work. The author extols the greatness of his parents who had the prophetic insight to give him an appropriate name. Tandava is interpreted in the present context as one who was beckoned to leap across the sea of births as well as one who dances eternally in the delight resulting from divine wisdom. The two sections of this work are called ‘The exposition of the Truth’ and ‘Doubts cleared Away’  They explain the basic philosophical principles and clear doubts which are likely to arise in understanding these principles. In language easy to understand, the author gives a remarkably clear exposition of the tenets of Advaita. Its Telugu translation will serve to make it known to a larger circle of readers and thus extend its usefulness. In the absence of any mention in earlier literature on Vedanta in Tamil, we can assume that ‘Kaivalya Navaneeta’ was probably written at least five hundred years ago. It was translated into German and English by Dr. Charles Graul DD of the Leipzig Lutheran Mission and we have in the Ramanasramam Library a book containing these German and English translations and published in 1855, both in Leipzig and London. We have not come across any other English translation so far. This was one of the works very frequently referred to by the Maharshi. We are confident that this great little book will prove to be of immense help to all seekers. Language: Telugu
Save this product for later
Display prices in: INR