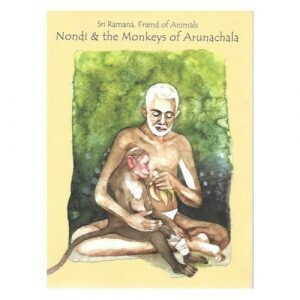 Nondi and the monkeys of Arunachala

SKU RAM056
₹150.00
In stock
1
Product Details
That a human being could speak with animals is not a commonly accepted notion. But in the life story of Bhagavan Sri Ramana Maharshi,there are abundant reports from those who witnessed first-hand the sage communicating with animals,especially the monkeys that lived on Arunachala Mountain. Ever since he went up the hill in 1899,Sri Bhagavan moved closely with the monkeys, understood their cries and gestures, and even followed their individual stories.One such account is that of Nondi,Who got his name from Bhagavan as he had the tendency to limp. As a youth,he was abandoned by his clan but was blessed to find his way into Bhagavan's care. Under Bhagavan's influence, Nondi was not only readmitted to his clan but rose to a position of prominence and even earned the respect of the other tribes on the hill. The present volume is Nondi's tale. But more than that,it tells the life story of one of the greatest saints of modern times-the sage who spoke with animals.
Save this product for later
Display prices in: INR