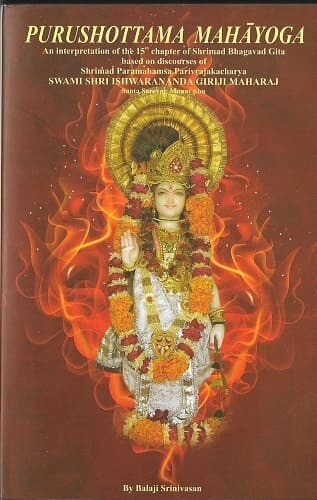 SST058
₹200.00
In stock
1
Product Details
An Interpretation of the 15th chapter of Shrimad Bhagavad Gita based on the Discourses of Paramahamsa Swami Ishwarananda Giriji Maharaj. This work is a compilation of various works of Parama Pujya Swami Ishwarananda Giriji on the 15th Chapter of the Bhagavad Gita. The idea for the work came as a natural culmination of some vimarsha sessions in Bangalore where a few Sadhakas studied the first 15 chapters over a period of two and half years, using Shankara Bhashya and Swamiji's works ( Soul Supreme and hindi lectures titled 'Purushottama Parichintana') In the fifteenth chapter of the Bhagavad Gita, the Lord reveals the main import of his teaching. With Arjuna as the nimitta (instrument), the Lord, with uncalculating compassion, graciously and as fully as its possible, opens out the supreme an most subtle secret of the Purushottama, the Supreme Truth.
Save this product for later
Display prices in: INR