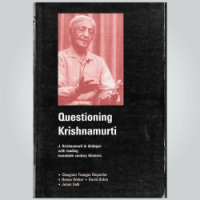 In the last two decades of his life, Krishnamurti engaged in several discussions with scientists, Buddhist scholars, philosophers, artists and Jesuit priest.

In his foreword to the book, editor David Skitt says: For the first-time reader, the range and vocabulary of these conversations may seem daunting.

Is this philosophy, psychology, or religion? Or all three? Krishnamurti himself did not like giving a name to what he talked about. his agenda was very open-ended, always totally free to cover any aspect of the human condition.