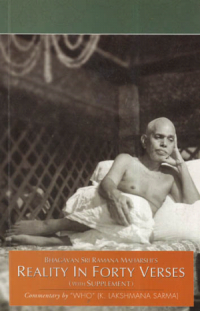 RAM 024
₹90.00
In stock
1
Product Details
'Everyone is saying that Lakshmana Sarma's commentary on Ulladu Narpadu is the best. Nobody has studied Ulladu Narpadu the way Sarma has.'. This pregnant remark from the Master himself speaks volumes of the value of this work. Sri Sarma's initial hesitation to study this Text on the plea of his unfamiliarity with the classical Tamil Tongue was instantly overcome when the Maharshi himself offered to tutor him privately. And this enlightening edification went on for three long years. The repository of solid wisdom chose to flow in rich rivulets of illuminating and nectarine exposition. Sri Sarma meticulously compacted them in a commentary that was first published as early as in 1936. This Treasure-trove thus far available to the Tamil-knowing public is now thrown open to non-Tamil-knowing devotees for the first time. This translation by "Kays", it is felt, does full justice to the original.
Save this product for later
Display prices in: INR