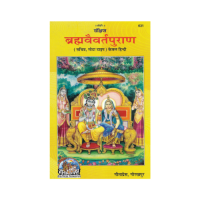 GP 631
₹250.00
In stock
1
Product Details
This is Vaishnava Puran. In this Puran, he has been described as the chief favored of Lord Krishna, and he has been told the cause of creation. The word 'Brahmavyvart' means the meaning of Brahma, the transcendental meaning of Brahma. The transit amount of Brahma is 'nature'. It is found in the 'Brahmavyavta Purana', the rendering of diverse results of nature. Although the mention of Vishnu's incarnation Krishna is found in many mythologies, but in this mythology this subject has been different. In 'Brahmavavarta Purana', Krishna is considered as 'Parabrahma', by whose desire the universe.
Save this product for later
Display prices in: INR