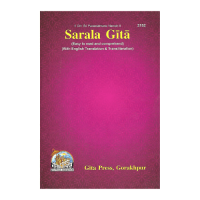 GP2152New
₹70.00
In stock
1
Product Details
'Gita' is one of the greatest books of the world. It cannot be seen in the limited scope of Hinduism, because it has been translated into many languages of the world and millions of billions of people of the world are living it happily by following the philosophy of life in it. 'Geeta' is one such book, which is full of unique mysteries. The more you read it, the more you will start to get new meanings, new expressions and new arguments. This book, which originated from the dialogues of Lord Krishna and Arjuna, has been guiding many saints and mahatmas from Dwapar era till today. Many ordinary people have become great by following its teachings. Meera, Sur, Chaitanya and Mahatma Gandhi have been receiving life-power from the Bhagavad Gita. In the presented book, the teachings of Gita are presented in simple and easy words. So that it can be useful for elders as well as children. In this place, eighteen chapters of 'Gita' and seven hundred shlokas have been given prominence instead of words, so that even the common people can easily accept their expressions and teachings. Presented is a simple Gita paving the way for duty, justice, virtue, nature, spirituality,
Save this product for later
Display prices in: INR