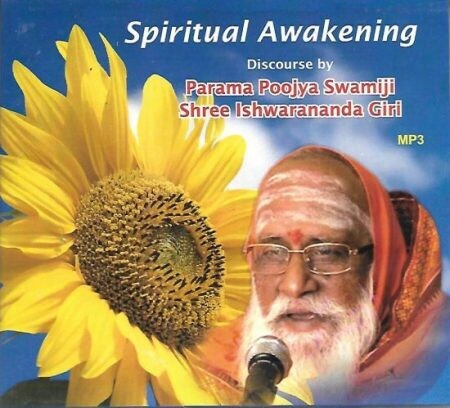 SST A 028
₹50.00
Out of stock
1
Product Details
"Spiritual Awakening" - Discourse by Parama Poojya Swamiji Shri Ishwarananda Giri ‘Spiritual Awakening’ has 3 parts in it. Each part has a play time of around 1 hour. The Guruji mainly talks about the text of ‘Pratha smarana stotra’ in this discourse. He takes you through the topic step by step making it easier to understand. In the first part, Guruji stresses on the importance of texts and literatures. He says, texts are nothing but the records of the Guru! How would you have connected to the experiences of the learned ones without texts? Text (Shastra) is the one which makes the experience of the Guru live through hundreds and hundreds of years, till eternity! By explaining the significance of the texts he sets the platform for the concepts which are going to follow. In the second part Guruji throws light on the process called ‘Atma Vimarsha’, review of the self, review of the soul! He tickles your thoughts by asking questions like “How are you going to evaluate your life?, How tall you have grown? How much money you have made? How many people you helped? How?” Can these serve as a scale of evaluation of the Atma? If not, then what else does? In the third part Guruji says the texts are gems of wisdom given by the mighty Guru Acharya Shankara. Only by studying such texts can one attain spiritual awakening! Has this triggered some awakening already? Wake up to spiritual awakening through this discourse by Ishwarananda Giriji. Swami Ishwarananda Giri is the founder of Samvit Sadhanayana Ashram at Mount Abu, Rajasthan, an institution dedicated to the revival of India's ancient spiritual culture and the mystic tradition of Adi Shankara. He is the author of several books and composes and sings extempore. A Presentation of Samvit Sadhanayana Santa Sarovara, Mt. Abu (Rajasthan)
Save this product for later
Display prices in: INR