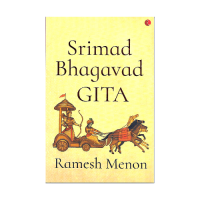 Rupa13
₹395.00
Out of stock
1
Product Details
As the great Pandava hero, Arjuna, stands on the battlefield of Kurukshetra, preparing to fight an army led by his kinsmen and his beloved guru, he is overcome by despair and turns to his divine charioteer Krishna for counsel and solace. Krishna's message to his friend is considered to be the highest expression of Hindu philosophy.
Save this product for later
Display prices in: INR