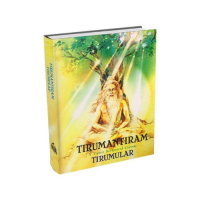 SKU RM0253
₹450.00
Out of stock
1
Product Details
Tirumantiram is the seminal text of Saiva-Siddhanta which has produced a galaxy of saints and has powerfully influenced the day-to-day life of millions in South India generation after generation. Its author Tirumular was according to legend a yogi who took compassion on a herd of cattle that had lost their shepherd and entering the body of the shepherd by his yogic power continued to look after the flock. So when we find in this great classic such splendid gems as “” Anbe Sivam– God is Love — we realize that the great yogi preached only what he lived. His fervent message that the ultimate Reality is One and all of us belong to the same family has special relevance to us moderns who have lost our moorings of faith and arewandering between two worlds one dead the other powerless to be born. Apart from the literary meritsTirumantiram blazes a number of spiritual trails any of which the aspirant can follow with the full confidence that the Goal Supreme is within the reach. The English translation and part of the notes are by the Late Dr.B.Natarajan who was not only a profound Tamil scholar but also a noted economist. The book has the original Tamil verse and the English translation.
Save this product for later
Display prices in: INR