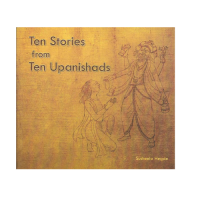 Misc024
₹160.00
In stock
1
Product Details
Categorized as 'jnana khanda', upanishads are considered as the knowledge part of the vedas. They are believed to have been written by rishis in the forests, after phasesof deep  contemplation. they speak about esoteric concepts of creations, the creator and the numerous forces in operation, in between. While presenting these abstract concepts, some Rishis introduced interesting human characters, albeit just as entry points. This tactic has made the narrative much more palatable for the layman , creating a leeway to take him into the curious world of upanishadic concepts. This book is aimed at potential new entrants into Upanishads and presents ten stories taken from ten upanishads. these stories are enlivened by characters from diverse backgrounds, all driven with an intense thirst for knowledge of the highest, as they call it
Save this product for later
Display prices in: INR