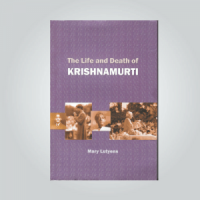 The Life and Death of Krishnamurti

JK044
₹299.00
In stock
1
Product Details
With Krishnamurti's death in 1986, aged 90, Mary Luytens was able to complete her perceptive books on this extraordinary man. Only now has she been able, in this one volume biography, to bring his life into true perspective. It is a brief but absorbing account of Krishnamurti's life, and in it she seeks to understand his death (and Death itself) in terms of his own words on the subject. The author claims no more than to introduce Krishnamurti's teaching, but buy studying his own explorations into its origin, she is able to give help to the reader who wishes to delve deeper, as many will. Having known him from the time he first came to England as a new Messiah under the aegis of the Theosophical Society, from which he dramatically broke away in 1929, no one is better qualified than Mary Luytens to see Krishnamurti's life as a whole and to search for an answer to the question "Who and what was Krishnamurti?"
Save this product for later
Display prices in: INR