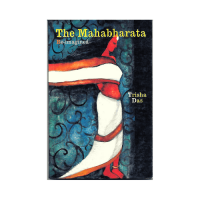 Rupa14
₹95.00
In stock
1
Product Details
About the book 'Do you ask that my body, worshipped by my father's subjects and untouched by any man, now succumb to five men? Draupadi waved her hands wildly as she inched closer to Kunti, her shrill voice resounding off the walls, 'I would rather jump into the river and drown myself. At least I would die a princess, not a prostitute.' Was Princess Draupadi in love even as her marriage to another man was being orchestrated? Did the great statesman Bhishma make a shameful admission as he lay dying on the battlefield of Kurukshetra? Did Queen Gandhari cause the death of her husband Dhritarashtra and sister-in-law Kunti? It's possible. About Author, Trisha Das is the author of two non-fiction books, 'The Art of the Television Interview' (UNESCO, 2007) and 'How to write a Documentary Script' (UNESCO, 2006). She has won two Indian National Film Awards and was the University of Georgia's International artist of the year' in 2003. She has also been a visiting artist/scholar at the universities of Michigan, New York, Georgia, Emory College (Atlanta), and Insead. Trisha currently resides in Singapore and works as a freelance writer.
Save this product for later
Display prices in: INR