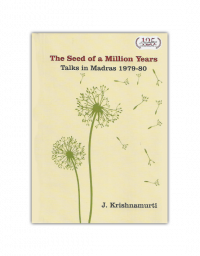 The Seed of A Million YearsTalks in Madras 1979-80

SKU JK067
₹150.00
Out of stock
1
Product Details
This series of six talks, given by Krishnamurti in Madras in 1979-80, marks a departure from his usual style of exposition. Usually, in the opening talk, he would dwell first on the problems of the world and then on the psychological factors underlying them. But here he starts straight away with the most ancient quest of man to find that which is sacred. ‘Man must have asked a million years ago, from the beginning of the time, if there is a reality if there is true if there is something timeless, something that cannot be measured by Man.
Save this product for later
Display prices in: INR