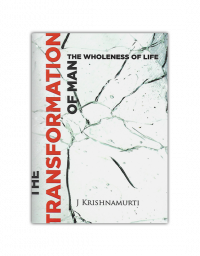 The Transformation of Man The wholeness of Life

JK057
₹250.00
In stock
1
Product Details
This volume, divided into three parts, contains unusual aspects of Krishnamurti’s teachings. The first section explores the reasons why mankind has lived for thousands of years in chaos and misery. The discussions, with well-known physicist David Bohm and psychiatrist David Shainberg, bring to light, as the chief cause, the fragmentation of the mind which is so deeply conditioned. The second section consists of Krishnamurti’s public talks, where he points out that the mind is almost unceasingly occupied with thinking so that it has lost touch with its original unconditioned freedom. The third section is concerned with answering the question: How is it possible to ascertain whether Krishnamurti’s teachings are true—whether he is talking out of the ‘silence of truth’ or out of the ‘noise of illusion’.
Save this product for later
Display prices in: INR