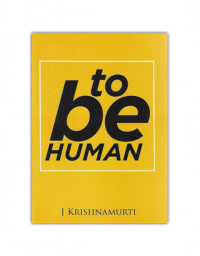 To be Human - J Krishnamurti

JK066
₹275.00
Out of stock
1
Product Details
J.Krishnamurti’s literary legacy in the form of talks, discussions, and writings has been estimated to equal the contents of four hundred average-sized books. In 1980, Krishnamurti wrote, on request, a one-page summary of his work, which he himself referred to as the ‘core’ of his teachings. The present compilation starts with this summary and follows it with a selection of passages of an amplifying kind. The editor takes the major aspects of Krishnamurti’s teachings and puts together extensive passages to expand on such themes as truth is a pathless land; freedom is found in the choiceless awareness of our daily existence; thought is always limited; time is the psychological enemy of man, and so on. The book also alerts the reader to Krishnamurti’s innovative use of language, the ways in which he uses ‘old words with new interpretations’.
Save this product for later
Display prices in: INR