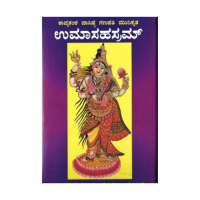 The stotra, ‘umaa sahasram’ is an acknowledged literary as well as Yogic masterpiece in Sanskrit. The story goes that Sri Ganapati Muni took a vow that if he doesn’t compose the entire kavya in 25 days, he’d give up writing poetry altogether (which was his very life till then). He could only finish 750 Slokas by 3 pm on the 25th day due to ill-health. He dictated the last 250 Slokas impromptu in a meditative state in the last few hours using his well-known aaSu kavitvam (extempore composition) calibre. He dictated 5 Slokas simultaneously to 5 scribes and finished his project by 8 pm.

The Greatness of Uma Sahasram :

This stotra is said to have miraculous healing powers when recited. Even from a literary standpoint,  umaa sahasram is full of poetic beauty. It uses dozens of Sanskrit poetic metres (called  chhandaa.msi or  vR^ittas), one per set of 25 Slokas called a  stabaka (meaning a flower bunch). It is a real feast to the listener and reader. The Slokas employ numerous  alankaaras that visualize profound spiritual concepts through vivid imagery. Language: Kannada
Save this product for later
Display prices in: INR