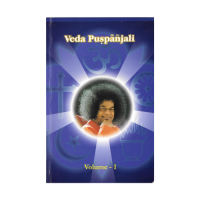 Veda Puspanjali A Compilation of Vedic Hymns (Set of 2 Volumes)

SSA 089
₹95.00
Out of stock
1
Product Details
Vedic Literature forms the foundation of the glorious spiritual culture of Bharath. The evolution of the Vedic thought starting from adoring the various natural forces as manifestations of the Divine, to the ultimate proclamations of oneness with the Divine, forms the vast body of Vedic literature. Upanishads that contain the highest Vedic philosophy often referred to as Vedanta, are the crown of Vedic literature. The highest importance and significance of Vedas can be understood from the fact that, in Bharat, no auspicious activity can start without chanting Vedic hymns at the beginning. Veda Puspanjali is a bouquet of Vedic blossoms from the students of Sri Sathya Sai Institute of Higher Learning, at the Divine Lotus Feet of the Bhagawan Sri Sathya Sai Baba, the Veda Purusha Himself. At a time when generally the teaching of Vedas even in traditional schools, is confined to mere chanting of Veda mantras without going into either a study of their meaning or contemplation on their experience, pains and efforts taken by the student compiler is worth appreciating as the essential purport of the various hymns in English along with their Sanskrit text in Devanagiri script and their transliteration in English is given which makes this a unique collection.
Save this product for later
Display prices in: INR