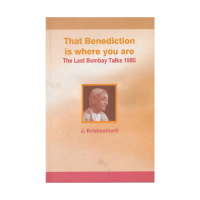 that benediction is where you are

SKU JK 030
₹120.00
In stock
1
Product Details
That Benediction is where you are consists of the last series of four public talks that Krishnamurti gave in Bombay, in February 1985. The talks are remarkable for the unusual perspectives and nuances that Krishnamurti offers on the psychological issues he deals with. There is a sense of poignancy in the substance and tone of the last talk, where he urges us to realize that we are wasting our lives by not freeing ourselves from our hurts, conflicts, fears, and sorrows, and by remaining in our narrow world of specialization. This freedom, he says, is the 'first step'. The talk ends on a deeply religious note with his profound observation: 'So, if you give your heart and mind and brain, there is something that is beyond all time, not in churches, not in mosques. That benediction is where you are.'
Save this product for later
Display prices in: INR